The gamekeeper told me I’d have to wait for the fillet from the deer I shot. It needs to be hung for a few days—apparently in the first twenty-four hours rigor mortis really sets in and it would be inedible until the tissues start to soften again.

Ogechi I’ll tell you a creepy Chinese story now. Keep your hopes up!

Marjory This will not be good.

Ogechi gently plays the concertina as background to her creepy story.

Ogechi A Chinese Siamese twin had his throat slit …

Marjory It gets worse!

Ogechi The slit-throat brother died there and then in their Shanghai hovel but his brother didn’t die there and then. He just couldn’t work out why they weren’t walking any more, or talking any more, or eating any more. He thought he’d done something wrong, but he couldn’t work out what. How cruel the world can be to the sensitive. To kill one half of a Siamese twin, and leave the other half not knowing, in a room with no food and no heat, and in the wintertime too. That’s a box it’d be hard to write yourself out of, and he didn’t, the poor sap. He died five days later, and some said he starved, and some say it was the cold that got him. 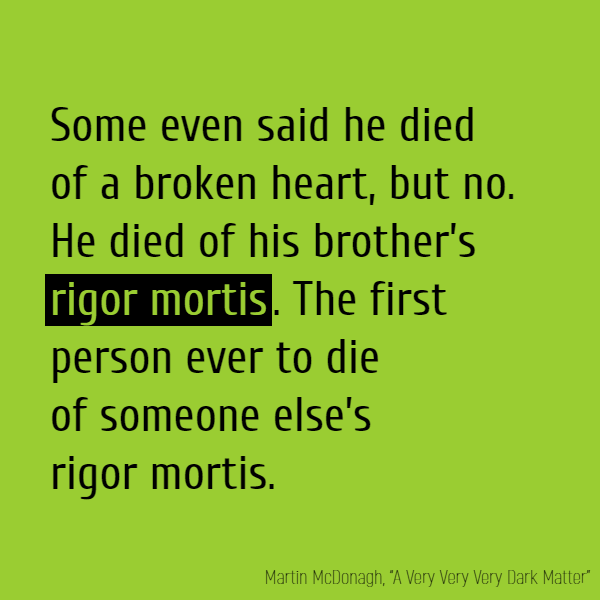 She finishes the tune and hangs the concertina on the wall where it was previously.