Dell Kimberly, I was wondering if I could have your number.

Josh Dude. She’s with me.

Dell No, she’s not. Not yet anyway. At best, this is a first date, and I’m shocked that that even happened. I have nothing against you. You might not be a bad guy. Most likely, but maybe not. You’re incredibly handsome. You were probably very handsome when you were a kid too. I think that explains your lack of substance and personality. Only because nobody’s ever really challenged you before. So now as an adult, you think everything you say means something, but it means nothing, actually. You don’t know what you’re talking about, it’s upsetting, and I think she probably sees through that. You’re very pretty, but you’re shallow beyond belief. (to Kimberly) Anyway, can I have your number?

Dell What are you doing?

Josh You just said all that shit.

Dell Yeah, but it was just an observation.

Josh And you ask my girl out in front of me?

Dell Shit. Sorry. My mistake. I see that now. I shouldn’t have done that. She’s way too beautiful.

Dell I should be more of a realist. I should know I’m a C, maybe a C+ in winter, when I can cover up my body more. Even though you’re a douchebag, you’re incredibly attractive, so maybe it’s only fair you two pair.

Kimberly smiles. Josh looks at her.

Kimberly What? It rhymed.

Dell She’s right. It rhymed. Alright. Let’s... Can you just put me down? 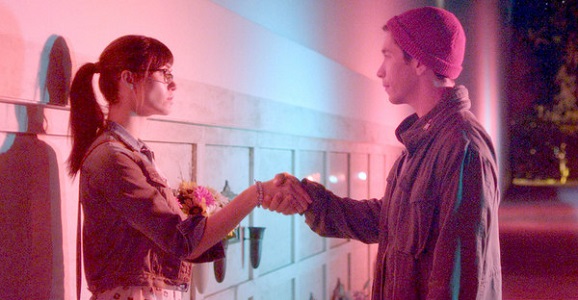